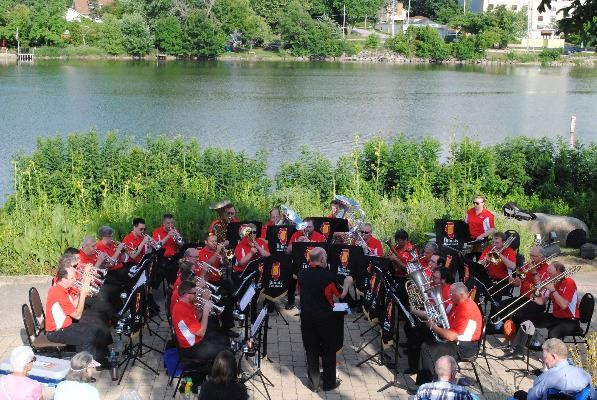 On Sunday evenings in July, the Geneva Cultural Arts Commission will host free outdoor concerts at the scenic River Park located in downtown Geneva on the west shores of the Fox River at 151 N. River Lane. The performances, which begin at 6 p.m., may be viewed from natural terraced seating. There is also space for personal lawn chairs and blankets.

Upon inclement weather, performances will be moved to the United Methodist Church of Geneva's Fellowship Hall, 211 Hamilton St. Check the City's Alert Center and Facebook page for updates.

The Illinois Brass Band opens the series with a celebratory 4th of July performance on July 3, a perfect time to commemorate Independence Day!  Join this musical celebration to hear John Phillip Sousa marches, military songs, Broadway and popular tunes, as well as other beloved orchestra renditions.

Good Clean Fun Band will deliver an exciting, engaging show on July 17 featuring a playlist of party hits spanning seven decades. The group has quickly become one of the region’s most requested party bands after playing across the United States as well as Ireland, Trinidad, and Thailand. More recently, Good Clean Fun has shared the bill with top oldies acts like Jay and the Americans and Chubby Checker, and it has opened for Bill Medley of the Righteous Brothers and Tommy James and the Shondells.

Chez Butter, a dynamic five-piece band that plays soul, funk, Motown, R&B, and jazz, will round out the concert series on July 24 with great upbeat music for your listening pleasure. The band’s fun-loving style of soul keeps crowds up and moving at a wide variety of events throughout the Chicago region.

For questions about the Concert Series, please email the Commission at culturalarts@geneva.il.us.